August 27th, 2019- BREAKING NEWS: A new hearing in the Ninth Circuit Court of Appeals is scheduled for October 1st, 2019, to hear the government's appeal in EBSC v. Trump.
JOIN US IN THE COURTHOUSE ON TUESDAY, OCTOBER 1, 2019 AT 9 AM TO HEAR THE GOVERNMENT’S APPEAL IN EBSC V. TRUMP.
LOCATION: 95 7TH STREET, SAN FRANCISCO, CA 94103
In 2018, District Court Judge Tigar ruled in favor of EBSC (and other plaintiffs), finding that a new regulation enacted by the Trump Administration violated the immigration laws of our country. This regulation would have barred asylum seekers from applying for asylum if they entered anywhere than through a designated point of entry. Judge Tigar ordered a preliminary injunction, stopping the regulation from going into effect. The Ninth Circuit will now hear various arguments stemming from the government's appeal.

On November 9, 2018, President Trump issued a proclamation that, in combination with a rule promulgated by the Department of Homeland Security (DHS) and Department of Justice (DOJ) that same day, bars from seeking asylum any individuals who enter the United States from Mexico between ports of entry.

EBSC is one of four plaintiffs named in a lawsuit immediately filed in federal court in San Francisco charging the administration with violating the Immigration and Nationality Act as well as the Administrative Procedure Act that specifically state that any individual in the U.S. or arriving at the border – “whether or not at a designated port of arrival” – has a legal right to apply for asylum.

These laws apply to people who are already in the U.S. and are unable to return to their home country because of persecution or a well-founded fear of persecution based on race, religion, nationality, membership in a particular social group, or political opinion.

“The asylum ban, coupled with CBP’s widespread practice and policy of turning back individuals attempting to seek asylum at ports of entry, would effectively deny protection to thousands of vulnerable individuals. The government’s blatant disregard for the rights of asylum seekers cannot stand.”

Why does this matter?

The words on the Statue of Liberty -- “Give me your tired, your poor, your huddled masses yearning to breathe free…” – exemplify core values for our country and illustrate why EBSC exists.

East Bay Sanctuary Covenant was founded in 1982 as part of the Sanctuary Movement with a mission to help people fleeing from horrific civil wars in Central America.

EBSC has one of the largest affirmative asylum programs in the country and has filed nearly 5,000 asylum cases with an over 97% success rate in adjudicated cases - demonstrating that our clients have legitimate cases that are being approved by the U.S. government.

This attack is another example of the Trump administration rewriting the law to discriminate against refugees of color from poor countries. 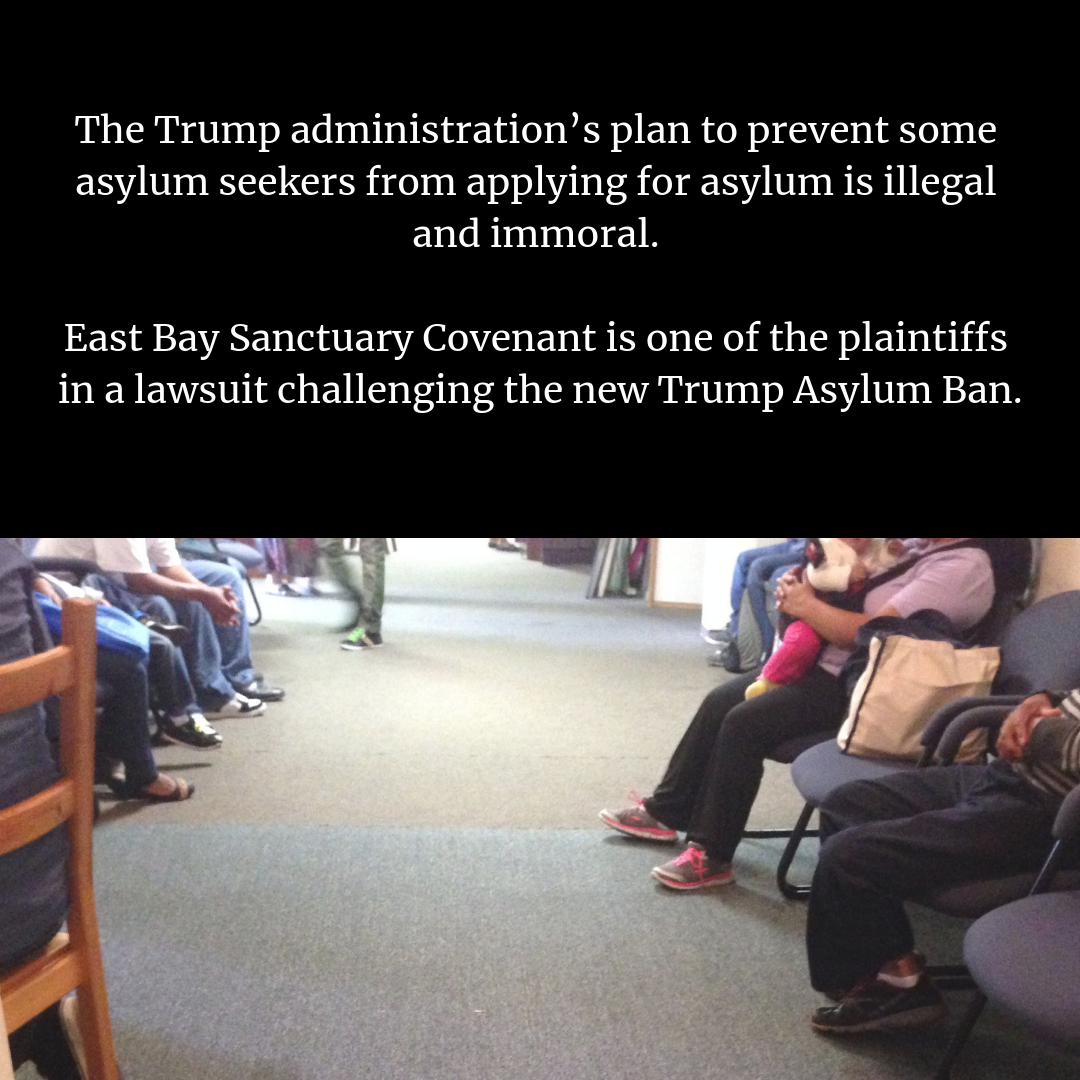 Facts about the Asylum Ban Lawsuit

“The ban will have a huge and detrimental impact on hundreds of Bay Area asylum applicants. For 36 years, we have helped vulnerable populations — victims of gender-based violence, indigenous Guatemalans, LGBT individuals, unaccompanied children, and people fleeing political persecution — obtain asylum. Our clients deserve safety and protection under U.S. and international asylum law.”